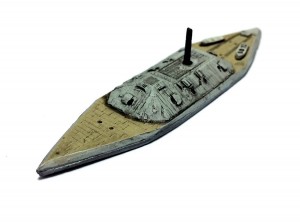 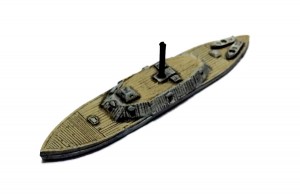 A few weeks ago I found some 1/1200 Civil War ironclads from Stone Mountain Miniatures that I bought 15-20 years ago. Last night, I wanted a fast project, so I decided to speed paint the Confederate ironclads.

The models are pretty rough, but they are very inexpensive — 2 or 3 ships for $7.95. Still, I felt like they could be quickly painted to a reasonable tabletop standard.

Assembly. The models needed a lot of flash trimmed and frankly I didn’t do a very good job on that. Each ship required a smokestack and some required boats. There were no instructions, but my handy Ipad let me look up each ship. 15 minutes.

The ships did have a fair amount of planking and armored bar detailing, but a lot of it was shallow. Therefore, I airburshed a very light coat of Vallejo Surface Primer Grey on each, trying not to fill in the detail. 5 minutes.

I thinned down Vallejo Panzer Aces Light Mud for the decks. I was worried about filling in the detail, so I thinned it way down to almost a wash. I painted each ship, then went back with a second coat. 10 minutes.

I washed each model with my standard black wash and set them out to dry. 10 minutes.

As I stated above, these ships are pretty rough. However, at around $2.70-4.00 each, one can build a huge fleet cheap. I have 4 monitors, New Ironsides and a steam frigate, so I’ll probably speed paint them as well.

I may order some Thoroughbred 1/1200 Ironclads. They appear to be much better detailed, though about twice as expensive. The extra detail may be worth it; I dunno. Unfortunately, I believe that they are noticeably smaller than the Stone Mountain ships (which are actually around 1/900 to 1/1000 scale). The CSS Tennessee Stone Mountain model is 2.75 inches long. The prototype was 209 feet long. That works out to 1/912 scale. A true 1/1200 scale model should be a little less than 2 1/8 inches long. 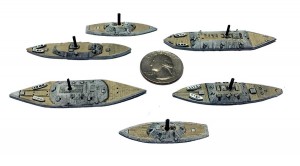 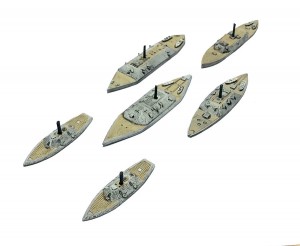