In preparation for painting a Zulu Wars British Force, I tested the 9 white acrylic and 2 enamel paints I own for opacity (ability to cover black). Obviously this test is not comprehensive. I’ll probably add to it if I get more paints. I’ll add photos later.

I painted a single layer, double layer and triple layer of each paint on a sheet of white 24 lb paper. The paper had solid black areas to test the paint’s opacity over a black basecoat. I used a Rosemary & Co. flat brush. 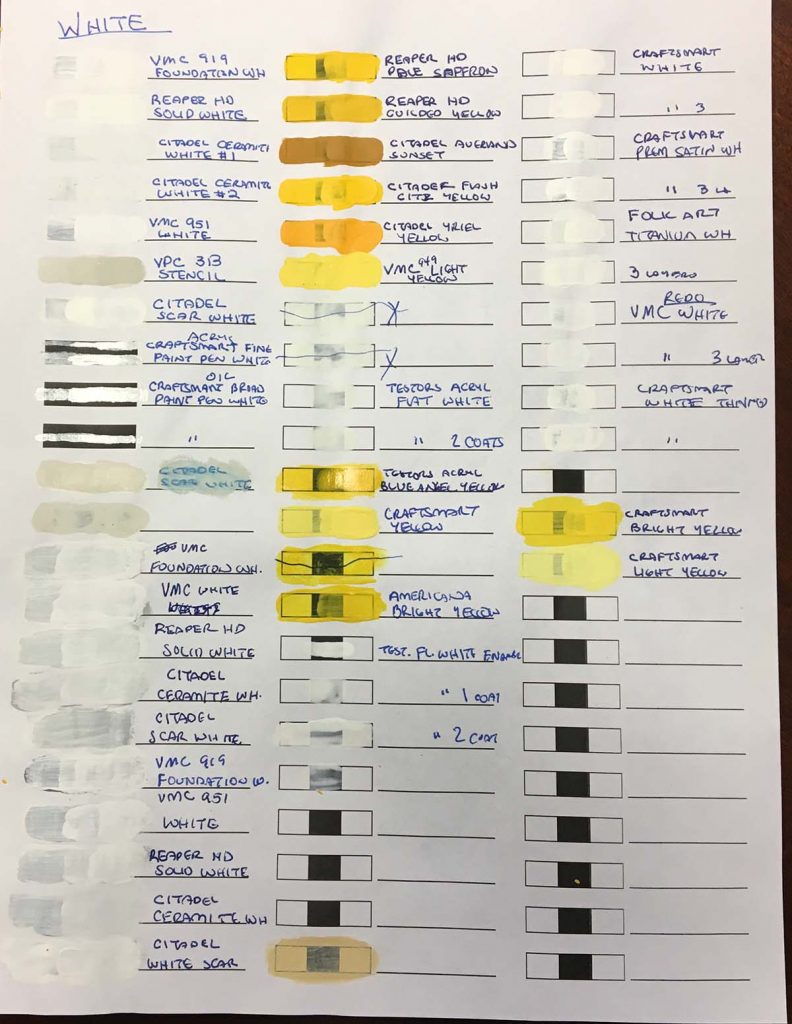 I had already slightly thinned my Citadel paints when I decanted them into dropper bottles. The remaining paints were used “out of the bottle” and not thinned except as noted below. The craft paints were thicker than game paints, so I thinned them to Vallejo consistency with Liquitex Airbrush Thinner (a great thinning medium).

Citadel Ceramite White B-/A/A Excellent opacity for a white, but noticeably drabber than the other whites.

Testor’s Flat White Enamel (oil based) A-/A-/A- Best single layer coverage of any white, but you can’t add additional layers unless you let it cure for at least 24 hours. Given the hassle of messing with enamels, I’d rather use acrylics and put 2 layers down. I tested the Testor’s because I used to be a dedicated enamel paint user. I grudgingly changed to acrylics and have found them wanting compared to enamels. However, this test pretty convincingly showed that the best acrylics are getting close to the enamels.

The VMC 951 White was the best color in the test, but the Craft Smart Matte White did surprisingly well. Even thinned, it’s better than the Citadel Scar White.