In preparation for painting a Zulu Wars British Force, I tested all 26 of the blue acrylic paints I own for opacity, coverage and vividness. I intend to do this with other colors as time permits.

The best blues, in my opinion, are:

These paints would give you a very solid range of blues; I doubt you’d need any more.

Obviously this test not comprehensive. I will probably add to it if I get more paints. 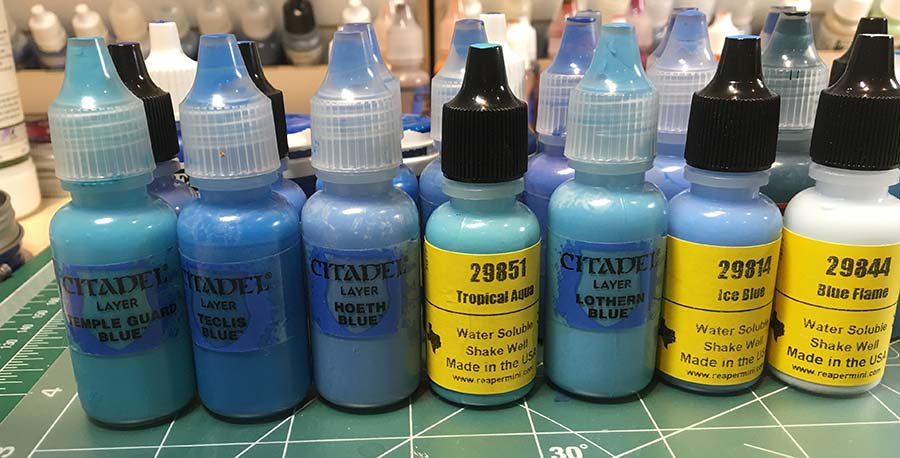 I painted a double layer and single layer of each paint on a sheet of white 24 lb paper. The paper had solid black areas and black lines to test the paint’s opacity over a black basecoat. I used a Rosemary & Co. flat brush.

I had already slightly thinned my Citadel paints when I decanted them into dropper bottles. The remaining paints were used “out of the bottle” and not thinned.
A photo of the test sheet is below, but the colors are very approximate. 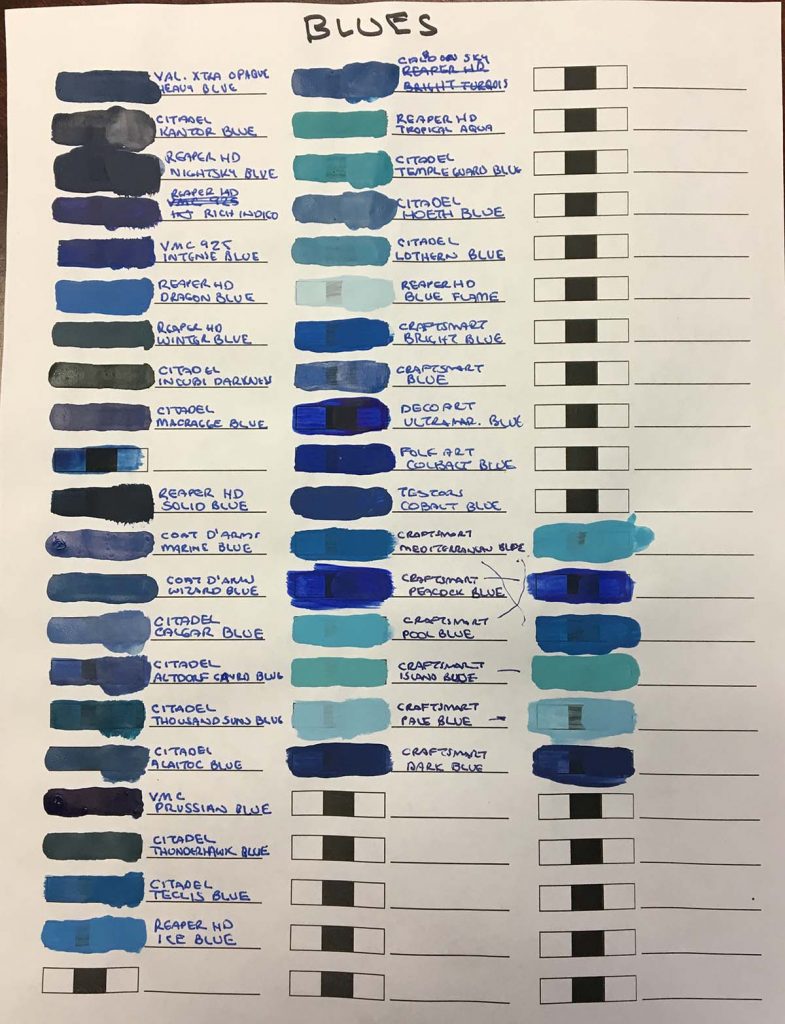 The paints are grouped by approximate brightness. I’ve appended a code after each paint like this: A/A/10/A

The first number is “vividness” on a 1-3 scale, with 1 being a vivid blue, a 2 being an average blue and a 3 being a drab blue. This is a somewhat subjective standard, of course. A 1 is a very “good looking” blue to me.

The final letter is for coverage on a white base:

Some paints may have a parenthetical letter that indicates if the color has a noticeable green (n) hue or purple (p) hue. Most of the blues don’t look particularly green. Blues that look more purplish are in a separate “intense” section. If a paint is not otherwise described, it’s a “normal” blue.

Some ratings may have a plus (+) or minus (-). This means that the rating is noticeably higher or lower than most paints with that rating, but not enough to justify a higher or lower rating.

Unsurprisingly, blues have great opacity and coverage. Craft paints were not thinned unless otherwise noted.

Reaper HD Dragon Blue is the best blue, in my opinion because it is a vivid blue with excellent opacity and coverage and not particularly light or dark.

Reaper HD Tropical Aqua was the best of the light greenish blues. It has better opacity than Citadel Temple Guard Blue

Citadel Lothern Blue is a greenish blue but more blueish.

Citadel Calgar Blue is a solid blue similar to but darker and a bit more vivid than Citadel Hoeth Blue.

Reaper HD Blue Flame was the lightest blue tested by a sizeable margin, but fairly drab. Its opacity was inferior to most of the other light blues.

Coat D’ Arms Marine Blue was the best in my opinion. A pleasing medium blue with excellent opacity and coverage.

Testors Model Master Acryl Cobalt Blue is a perfect match for Coat D’Arms Marine Blue. I use the Model Master Acryl Paints exclusively for airbrushing (and they are excellent). However, this color turned out to brush quite well. It is much thinner than the Coat D’ Arms however. If you prefer thinner paints, this paint is a good alternative for Coat D’Arms Marine Blue.

Citadel Thousand Suns Blue is a rather drab green/gray blue.

Citadel Thunderhawk Blue is a drab green/gray blue but is darker than and has much better opacity than Citadel Thousand Suns Blue.

Craft Smart Matte Dark Blue is close to Citadel Altdorf Guard Blue and better when not thinned. When thinned, the first layer’s coverage worsens, but it will still produce good coverage with two layers.

Citadel Altdorf Guard Blue is very close to Coat D’ Arms Marine Blue, but with much poorer opacity and coverage.

These blues are the more purplish blues.

Vallejo Model Color 925 Intense Blue is the best of the bunch in my opinion. Not quite as purplish as Reaper HD Rich Indigo or Citadel Macragge Blue.

Vallejo Game Color Extra Opaque Heavy Blue is the best of the dark blues in my opinion. Dark, but definitely blue, with excellent opacity and coverage.

Citadel Incubi Darkness is a drab, very dark blue that looks like black at first glance.